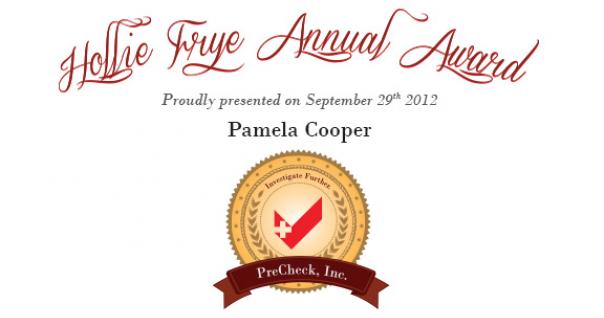 PreCheck, the leading background screening and credentialing provider for the healthcare industry, recently instated the Hollie Frye Annual Service Award to commemorate the legacy of one of its key leaders and to recognize its employees for excellence in teamwork and customer service.

Bruce Butler, PreCheck's President, established the Hollie Frye Annual Award for Outstanding Performance in Recognition of Continued Excellence to recognize employees in the categories of job excellence, teamwork, and customer service. The award honors the memory of one of the background screening provider's pioneer investigators and leaders. Hollie Frye was PreCheck's Applicant Investigations Manager and is dearly remembered by both employees and clients alike.

Nominations for the Hollie Frye Service Award were submitted directly from PreCheck employees, and those nominations were then reviewed by a committee comprised of PreCheck's President, Director of Operations, and Human Resources Department. The winner and first runner-ups were announced at the company's annual picnic on September 29, 2012 in Alamogordo, NM. Employees from Hollie's department declared the event a "Celebration of Life" in her honor, releasing over 50 pink balloons into the sky.

Receiving the most nominations, the first recipient of the Hollie Frye Service Award is Public Record Investigator, Pamela Cooper. Pamela was recognized by her peers for embodying job excellence, maintaining the highest professional standards, and delivering work of the utmost quality. Pamela is always willing to assist others, regardless of her own workload. Reference Investigator, Magiting Bartolome, was declared first runner-up and nominated for his high standards of excellence, professionalism, and commitment to PreCheck. Highly regarded Client Account Manager, Mark Andrade, was also a runner-up and recognized for his unparalleled customer service and willingness to always lend a helping hand.

PreCheck is proud to instate the Hollie Frye Service Award as a commitment to recognizing excellence and going the extra mile for clients and co-workers. "Hollie Frye was, without a doubt, the most knowledgeable person we ever had," states Dana Sangerhausen, PreCheck's Director of Operations. "She also just had a way of looking at things and getting the big picture about the person. Hollie has shaped so much about what we do from our training to the conversations we have with our clients today." The award will be given at PreCheck's annual company picnic going forward and will involve the previous year's winner in the selection process.