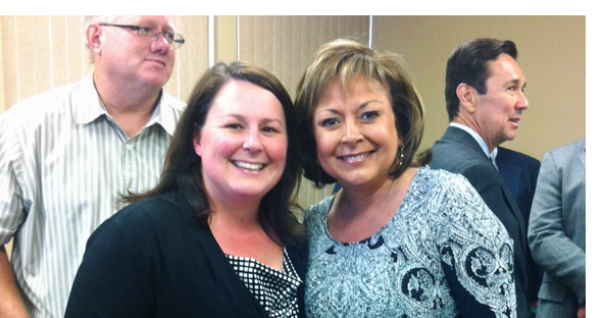 PreCheck, a healthcare exclusive employment and background screening firm, recently received a visit by New Mexico Governor Susana Martinez to announce the creation of up to 40 jobs in Alamogordo.

PreCheck, an employment and background screening firm specializing in the healthcare industry, welcomed New Mexico Governor Susana Martinez and New Mexico Economic Development Secretary Jon Barela to the company’s operations facility in Alamogordo, New Mexico on Thursday, June 12, 2014. PreCheck, who currently employs 128 workers in Alamogordo, announced the company would create up to 40 jobs this year and up to 100 jobs over the next three years.

“We’ve worked to create an environment that diversifies our state’s private-sector economy through regulatory reform or improvements in the tax environment,” said Governor Martinez. “PreCheck has been a wonderful private-sector job creator in southeast New Mexico and we congratulate them on their growth in Alamogordo.”

“The State of New Mexico has been a great place for PreCheck to operate. New Mexico has a hardworking and talented workforce, accessible government leaders, low risk for natural disasters and now has an even more competitive business climate that allows us to reinvest in our employees and growing our business,” stated Zach Daigle, President and Chief Operating Officer at PreCheck. “We look forward to our expansion and continuing to give back to the Alamogordo community and the State of New Mexico.”