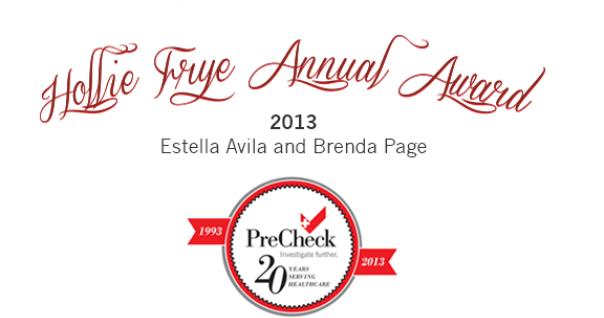 PreCheck, a healthcare-exclusive employment screening firm, recently presented the second annual Hollie Frye Service Award to commemorate the legacy of one of its key leaders and to recognize its employees for excellence in teamwork and customer service.

PreCheck, a leading background and employment screening firm exclusively serving the healthcare industry, recently presented the second annual Hollie Frye Service Award during their holiday picnic on November 12, 2013 at their office in Alamogordo, NM. This year, PreCheck’s headquarters in Houston, TX also presented an award during their holiday luncheon on December 12, 2013. The Hollie Frye Service Award was instated in 2012 to commemorate the legacy of one of PreCheck’s key leaders and to recognize employees in the categories of job excellence, teamwork, and customer service.

Zach Daigle, PreCheck’s President and Chief Operating Officer, proudly awarded Estella Avila, Public Records Supervisor, with the second Hollie Frye Service Award in appreciation of her strong dedication and allegiance with the company and staff. Estella was recognized by her peers for embodying excellence in all three categories. She has displayed dedication to PreCheck as well as her team while maintaining the utmost quality standards.

Zach also presented Brenda Page, Quality Assurance Specialist at PreCheck, as Houston’s first recipient of the Hollie Frye Service Award in recognition of her enduring commitment to PreCheck and excellence in customer service. Ms. Brenda, her respected title at the office, is a model employee, a leader, and a true inspiration. She was recognized for her commitment to service and her willingness to share her knowledge with others.

Nominations for the Hollie Frye Annual Service Award were submitted directly from PreCheck employees. Those nominations were then reviewed by a committee comprised of PreCheck’s President, Director of Operations, and Human Resources Department.

The Hollie Frye Service Award honors the memory of one of PreCheck’s pioneer investigators and leaders, Hollie Frye, who was PreCheck’s Applicant Investigations Manager and is dearly remembered by both employees and clients alike.

“Hollie Frye was, without a doubt, the most knowledgeable person we ever had,” states Dana Sangerhausen, PreCheck’s Director of Operations. “She also just had a way of looking at things and getting the big picture about the person.  Hollie has shaped so much about what we do from our training to the conversations we have with our clients today.” The award represents a heartfelt company tradition and is a meaningful way for PreCheck to celebrate its 20th anniversary exclusively serving the healthcare industry’s background and employment screening needs.

Founded in 1983, PreCheck, Inc. has focused exclusively on serving the healthcare industry’s background screening and employment qualification needs since 1993. PreCheck serves over 3,000 hospitals, long-term care facilities, clinics, educational institutions, and other ancillary healthcare organizations, across the U.S. PreCheck has evolved over time from a background screening provider into a turnkey outsourcing solutions provider, offering a full suite of background screening, compliance, and credentialing solutions all designed to help its clients adhere to the complex laws and regulations governing the healthcare industry. Based in Houston, PreCheck was recognized as a 2013 Inc. 5000 company and has achieved Background Screening Credentialing Council Accreditation by the National Association of Professional Background Screeners. http://www.precheck.com